Temp (River):
Minimum:18 şC Average:20 şC Maximum:21 şC
Water Clarity:
Clear to murky in places
Water Level:
37,7%
Rainfall:
0mm
Fishing Area:
Elephant Bay and the river mouth where it enters the main lake. (Lot of structure in this area)
Average Size:
Tiger Fish caught ranged from 1kg – 5.5kg. Some good fish were caught, for example: • A 5.2 kg Tiger Fish was caught trolling. It was caught on an orange Rapala. Skipper Langa • A 3.8 kg Tiger Fish was caught on sardine. Skipper Jetro • 5.5 kg Tiger Fish was caught trolling with an orange Rapala. Skipper Nathi
Other Conditions:
We have experienced some windy days out on the lake. With the water level dropping we concentrated at the mouth of the lake. We had no rain except a quick drizzle that passed at the end of August. Due to the water level being quite low the fishing spots have moved further towards the mouth.
Total Tiger Fish:
93 Tiger Fish that we know of were caught on the Pongola Game Reserve boats
Other Species:
A couple of Barbel came out with the biggest 10 kg
Bait of the Month:
lure colour of the month: orange
General Info:
Table: Indicate how the fish was caught during August 2017 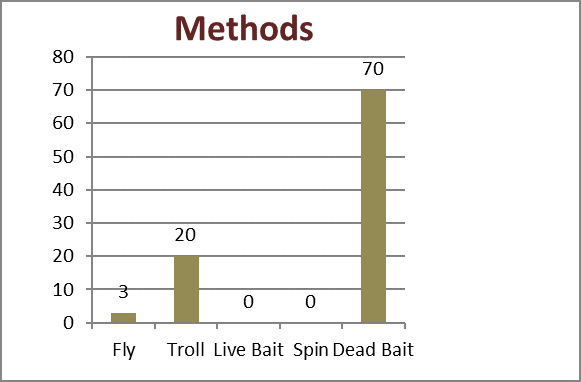